Tomorrow is Thanksgiving, so I’ll be headed to my grandparent’s house to enjoy some quality family time and some delicious home-cooked food.  This year I decided I would contribute by preparing a side dish.  I decided to make a classic Thanksgiving side that also happens to be one of my all time favorites- green bean casserole.  As most of you know, green bean casserole usually consists of canned green beans, cream of mushroom soup, and French’s fried onions.  Although this method is simple and tasty I decided I would try to make a fresher, somewhat healthier version of this classic. I did some searching online and came across a recipe that was intriguing firstly because of its name, “Best Ever Green Bean Casserole” and secondly because it had a ton of reviews, most of them positive.  I like that this recipe uses fresh ingredients, but while reading through the comments on the recipe I realized that most people had difficulty getting the onion topping just right. So, in order to prevent a cooking melt-down that would inevitably lead to a ruined green bean casserole in the trash and a disappointed Ashley, I decided to forgo the onion topping and just use the French’s fried onions instead! I know, I’m bad. If you’re more brave than I am and want the full recipe, please visit the site. Here’s the part of the recipe I used:

Ingredients minus a few I forgot to include

Bring to a boil enough water for the beans with 2 tablespoons of salt added. Add the beans and blanch for 5 minutes. Drain in a colander and immediately plunge the beans into a large bowl of ice water to stop the cooking. Drain and set aside. 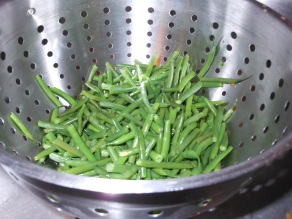 Melt the butter in a 12-inch cast iron skillet (I do not have one, so I just used a regular frying pan) set over medium-high heat. Add the mushrooms, 1 teaspoon salt and pepper and cook, stirring occasionally, until the mushrooms begin to give up some of their liquid, approximately 4 to 5 minutes. Add the garlic and nutmeg and continue to cook for another 1 to 2 minutes.

Sprinkle the flour over the mixture and stir to combine. Cook for 1 minute. Add the broth and simmer for 1 minute. Decrease the heat to medium-low and add the half-and-half. Cook until the mixture thickens, stirring occasionally, approximately 6 to 8 minutes.

Remove from the heat and stir in 1/4 of the onions and all of the green beans. I removed the mixture from the pan into a baking dish since I did not have a cast iron pan to cook it in.Top with the remaining onions.

Place into the oven and bake until bubbly, approximately 15 minutes. Remove and serve immediately.

Finished product minus a corner I devoured. NOM

This turned out better than I expected! The taste is rich and creamy and much better than the canned cream of mushroom version. It has just as much flavor, but without the added long list of “ingredients” found in cream of mushroom soup. Although, the French’s fried onions are not the healthiest option, overall this recipe is a better alternative to the typical one if you are wanting to eat more whole foods and use fewer processed food items. Anything made from scratch is always tastier anyway! I definitely think the few extra minutes it takes to prepare this is absolutely worth it. I hope you’ll give it a try!