This was not a typical Wednesday for me in the slightest.  I spent the first half of my day modeling in a photo shoot (photos will come soon!).  I had to be up pretty early so I stopped at Bruegger’s for breakfast.  On my way to Bruegger’s, I had a banana.

Yes, this picture is on top of my car, but I had nowhere else to take it.  I already drank my 10 ounces of orange juice, so yeah…there’s an empty cup.  I also had a cup of their hazelnut coffee with extra cream.  I ended up only eating half of my bagel, which was an asiago softwich with light cream cheese and bacon!

For lunch, I met the boyfriend at Chick-Fil-A after my photo shoot and had a grilled market salad and a large sweet tea mixed with lemonade. 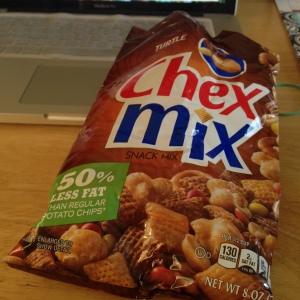 Before dinner, I ate what was left in my bag of Turtle Chex Mix, which wasn’t much.

My dinner, which is not exciting at all because I just so happened to eat the exact same thing as I did during my last WIAW…was Chipotle!  The same exact bowl of chicken, brown rice, cheese, black beans and lettuce.  I didn’t finish it all though because I ate that Chex Mix about 30 minutes before dinner.

Once America’s Got Talent came on, I got sidetracked and totally forgot it was still Wednesday and didn’t take photos of the banana flavored popsicle or the pear I ate as snacks after dinner.  It’s also why I’m posting this at almost 11pm!  Speaking of AGT, was anyone else shocked that they were sending Juan Carlos through?!

Have a great rest of the week!